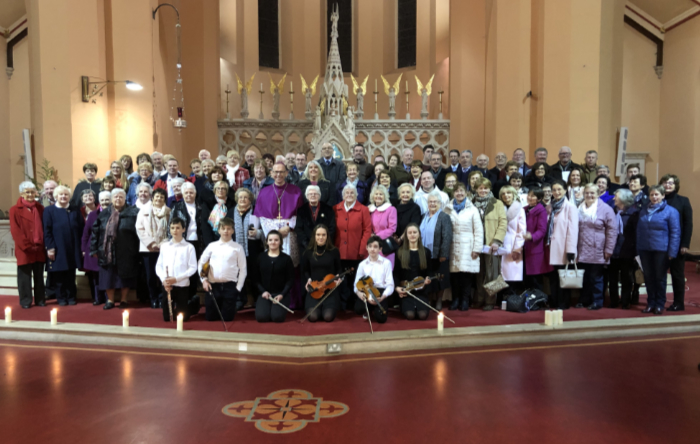 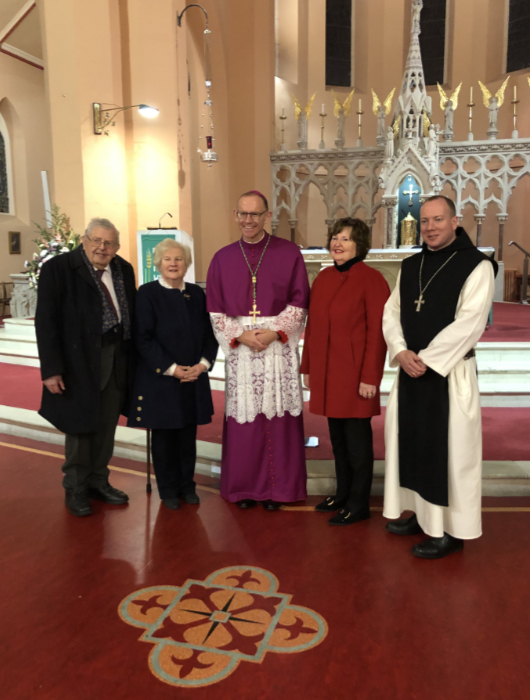 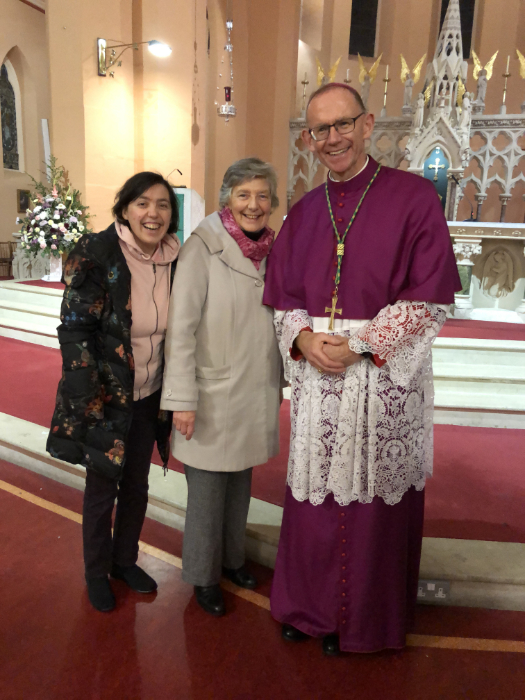 A loose paraphrase of the legendary Muiris Ó Súilleabháin from the Great Blasket Islands.

Today is a joyful jubilee ruby celebration, forty years of combining the talent of many choirs for sacred music in the two pastoral areas of the Eastern part of the diocese.  Well done to the many involved in bringing the choir together over these two score of years.

I’m very much aware of the keen interest in Killaloe diocese in liturgy and liturgical music going back to the time of Bishop Harty who had a special interest in matters liturgical and the legacy of that is still to be seen with the many excellent choirs in so many parts of the diocese.  I see it first hand every year at Confirmation ceremonies, the length and breadth of the 58 parsishes from Kinnity to Loop Head.  An outstanding example of it was the coming together of people from choirs all over the dicoese for my installation as Bishop of Killaloe, over two years ago.  I remember for the end of The Year of Mercythe outstanding combined choir celebration in Mount St. Joseph’s at the end of 2016, on this very feast, Christ the King.  The combined choirs again beautified the liturgy at Abbot Richard’s installation in Mountmellery and it was a proud moment for the dicoese when they sang for Pope Francis in Knock this August.  This year I had the joy of being at the combined charity choir concert under the baton of Noreen Spain in St. Mary’s in Nenagh for Fr. Peter McVerry’s charity and one would stand in the snow being transported into the spiritual realm with the outstanding sacred music there.

Choirs – assiting in the pathway towards the sacred

Choirs in general provide an intimate link between music and the Mass, between the songs and the sacrifice, between lyrics and liturgy. Music is one of the purest expressions of human emotions.  Music keeps our worship from being merely a matter of mind and after all as we relate to God we do so not just with our intellect.

Who among us cannot identify with the anxious Advent pleading in “O come, O come, Emmanuel”; Christmas joy in “Angels we have heard on high”; penitential sadness in the “Kyrie”; the agonising “were you there when they crucified my Lord?”; Easter ecstasy in “Christ the Lord is risen today”; elation in each “Gloria”; hope in “Be not afraid”; profound Eucharistic piety in that solemn “Ave Verum”; and the heart-stirring “Ave Maria; Christian lightheartedness in “I danced in the morning”; thunderous gratitude in “Now thank we Lord ourGod”.

It has been said that Music

Gives soul to the universe,

Wings to the mind,

Delight to the imagination

A charm to sadness

Gaiety and life to everything.

It is essence of order

To all that is good, just and beautiful.

Liturgy, Eucharist, the Mass is not a private party, a me and Jesus duet.  Good liturgy is done by the community, in community and for community.

On this feast of Christ the King, one week from the first Sunday of Advent I’m reminded of the age old tradition from St. Patrick’s College, Maynooth that during the night of the vigil of the first Sunday of Advent the college choir rise from their beds in the small hours of the morning and to the total surprise and shock of first year seminarians they sing in full voice outside their bedroom doors the advent hymn ;

That mourns in lonely exile here

Until the Son of God appear

You can imagine the experience of hearing that in full choir outside your bedroom door in the middle of the night – thinking one had died and gone to heaven!

I love the beautiful words that captures the centrality of sacred music in our prayer and liturgy – it runs:

“The Lord is worthy of all praise,

May he give you the gift,

Of striving to sing a new song to him,

With your voices, your hearts and your lives,

So that one day you may sing that song forever in Heaven”.

Liturgy of the Word

The reading in our solemn evening prayer gives expression to this in the text from Zephaniah 3:14.15b.17:

Sing aloud, O daughter Zion; shout, O Israel!  Rejoice and exult with all your heart, O daughter Jerusalem!  The king of Israel, the Lord, is in your midst; you shall fear disaster no more.  The Lord, your God, is in your midst, a warrior who gives victory; he will rejoice over you with gladness, he will renew you in his love; he will exult over you with loud singing as on a day of festival.

St. Augustine reminds us that singingin a sacred contextis praying twice.  With that on mind we acknowledge and celebrate the serious amount of praying thatthe combined pastoral area choir have done during alife time of dedication, diligence and outstanding service to Community and Church.

Looking ahead with hope!

So where to from here, after 40 years of sacred music with combined choirs.  It would be my hope on this ruby jubilee celebration that this entity in full bloom of two score years would not cease at this point.  They say that 40 is the new 21 and my hope would be that this entity would continue on a high note and scale the heights of many beautiful liturgical celebrations for many years to come.  I would hope that choirs around the diocese would continue to encourage good and participative congregational singing, despite the many challenges involved. A big part of the emphasis in the training of community led liturgies, underway in the diocese is to try and encourage a spirit of participative congregational liturgies to help people exercise their role of the priesthood of the faithful that they were baptised into, a role which complements the role of the ordained priest of Jesus Christ.

I’m so encouraged to see the continuation of the training of young people with the voluntary effort of Seinn na nÓg each year in Kilrush and Ennis and would hope that it might be possible to reignite the Senior Seinn for secondary school students at some stage in the future if possible funding might permit that to happen.

It’s good to see the Summer School organised annually by Ian Callanan and his collaborators in Mount St. Joseph’s and many also attend the Summer School in Maynooth and it is also good to see enthusiastic experts like Fr. Liam Lawton giving frequent inputs around the diocese each year.  My thanks to Maureen Kelly who coordinates many liturgical events on a regular basis and there are plans to reinvigorate what was a strong liturgical committee in the diocese in the near future.

However that is out there!  Returning to the business of the evening – I warmly congratulate everyone involved and thank everyone for the great work and celebration of liturgies over so many decades.  I congratulate the organists, choir directors, soloists and all the members of the Choir for the joy and that they bring into our lives in the liturgy.  Gura fada buan sibh.  Go gcúití Dia bhur saothar libh agus go maire sibh go ceann  bhfad.  Áiméan!