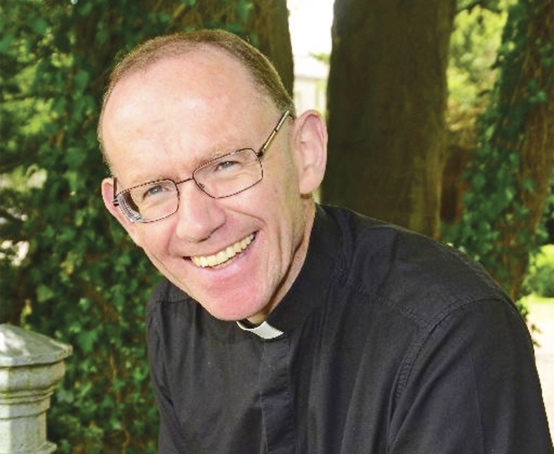 On Friday 29th July it was announced that Pope Francis had appointed Fr. Fintan Monahan as Bishop of Killaloe. Fr. Fintan’s ordination to the episcopate took place in the Cathedral of Ss. Peter and Paul in Ennis on Sunday 25th September 2016 at 3.00pm.

Bishop Fintan Monahan was born in Tullamore, Co Offaly, on 23 January 1967. His parents are Tom and Peg Monahan and he has one brother, Seán, and one sister, Caitríona, who is married to Dominic. From 1980-1996 the family lived in Carraroe, Co Galway where his father was principal teacher at Scoil Chuimsitheach Chiaráin, An Cheathrú Rua. In 1996 the family moved to Castlegar, Galway City, the native home of his mother.

Primary education was in Tullamore and secondary education was in Carraroe before studying for the priesthood for the Archdiocese of Tuam in Saint Patrick’s College, Maynooth in 1984. In 1987 he completed a B.Sc. in NUI Maynooth, a B.D. in the Pontifical University in 1990, an S.T.L. in Biblical Theology in 1992 and a H.Dip. in Education in NUI Galway in 1993.

Ordination to the priesthood was in Séipéal Mhic Dara, An Cheathrú Rua on 16 June 1991 by Archbishop Joseph Cassidy. While studying for the H.Dip. in Education in Galway he was curate in An Tulach, Baile na hAbhann, Conamara from 1992-1993. From 1993-2006 he taught Science, Irish and Religion at the diocesan college, Saint Jarlath’s College in Tuam, along with coaching basketball and hurling.

He was consecrated Bishop of Killaloe on September 25th, 2016 in the Cathedral of St. Peter and Paul, Ennis by Archbishop Kieran O’Reilly.

In October, 2019 he published a biography of St. John Henry Newman, published by Veritas, entitled A Perfect Peace, Newman, Saint for Our Time. 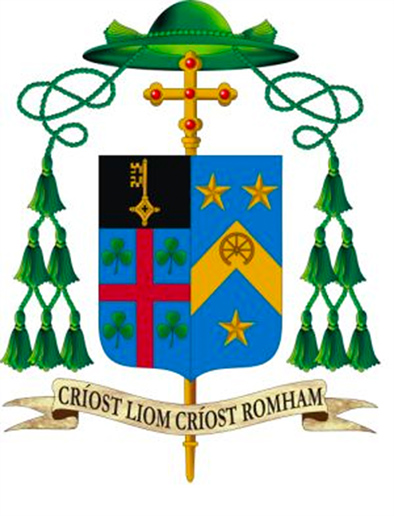 The Bishop’s Coat of arms consists of: on the left hand side, the ancient arms of the Diocese of Killaloe, and on the right, the personal coat of arms, chosen by the bishop himself.

The arms of the Diocese consist of a Latin cross between four trefoils with the emblem of the key occupying the chief position. The arms connote the guardianship of Christ’s Kingdom, with special reference to St. Peter.

The personal dimension of the new Bishop’s Coat of Arms represents his origins and ministry. It consists mainly of the Monahan family Coat of Arms with representations of faith, generosity and protection.

The three mullets (the term mullet in heraldry refers to a star with straight sides, typically having five points) wish to recall the three figures of the apparition of Knock; Our Lady, St. John the Evangelist and St. Joseph.

The arms also include the broken chariot wheel of St. Jarlath which represents the new Bishop’s priestly ministry in the Archdiocese of Tuam and long association with St. Jarlath’s College prior to his appointment as Bishop of Killaloe.

The Coat of Arms is surmounted by the Galero which was originally a pilgrim’s hat and is ornamented by twelve tassels called fiocchi.

Bishop Fintan has chosen as his motto;

"Crióst Liom Críost Romham" - Christ with me, Christ before me.

These words are taken from Lúireach Phádraig, (St. Patrick's Beastplate), a 5th Century Irish Hymn whose lyrics were traditionally attributed to St. Patrick and his ministry. The words reflect Bishop Fintan's prayer and hope for his ministry as Bishop of KIllaloe.

Homilies & Addresses From The Bishop’s Desk 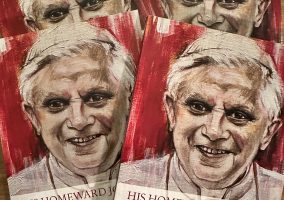 His Homeward Journey; The Life and Works of Pope Benedict XVI It was with great sadness that I… 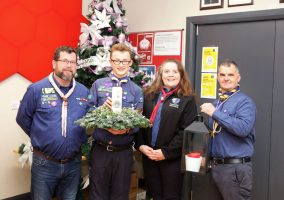 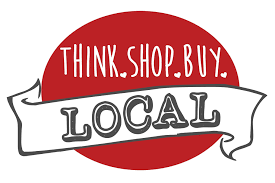 A trip to Tigh Mhicí in the village of An Cheathrú Rua, where I went to school was… 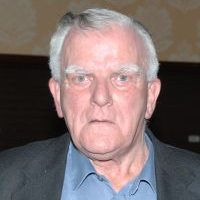 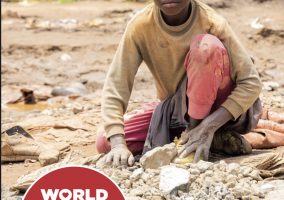 “You Shall be my Witnesses”

On Mission Sunday every year our immediate thoughts are of the numerous Irish missionaries, priests, religious sisters and… 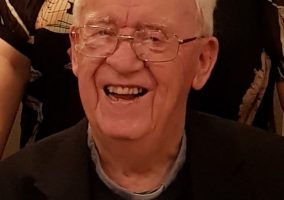