His Homeward Journey; The Life and Works of Pope Benedict XVI 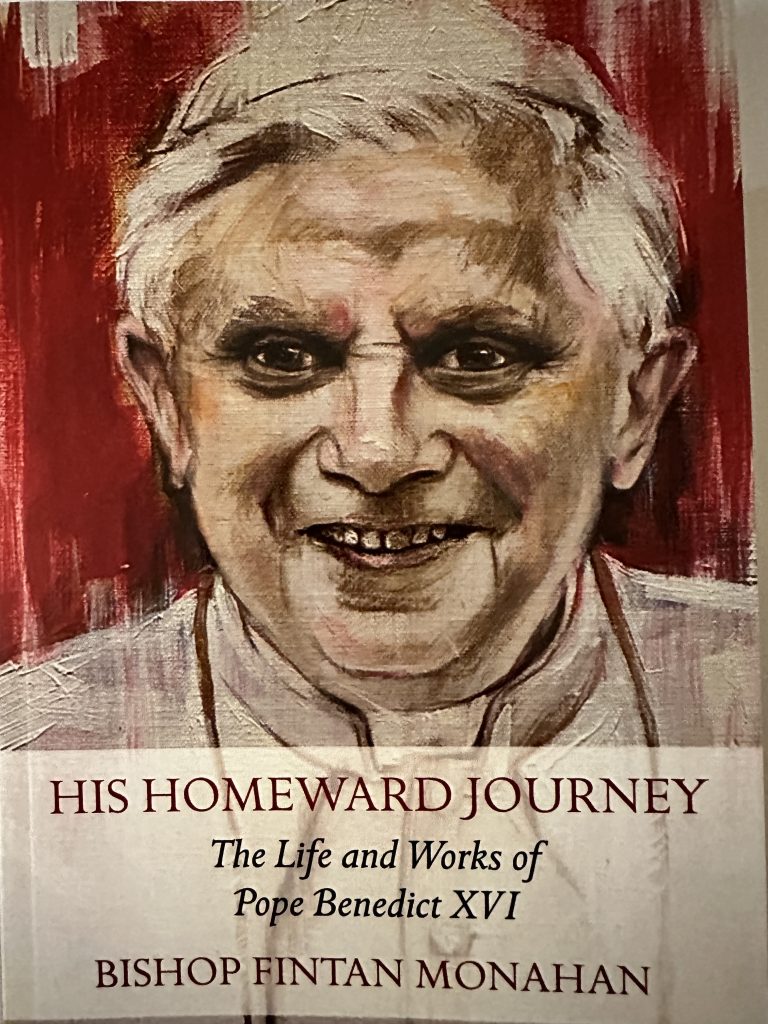 It was with great sadness that I learned of the passing of Pope Emeritus Benedict, RIP on the last day of the year, 2022.  There was a great poignancy to the dignified and solemn funeral ceremony in Rome on January 5th.

When asked to pen s short publication on the great man, I readily accepted the invitation as I had been a keen follower of his writings for many decades.  As a young student and up to the present, I read with great interest his many theological and spiritual works, over 60 books in total.  Even as Pope, he continued to write and his trilogy of books on Jesus is regarded as a classic of the genre and I believe will stand the test of time for many generations to come.

His Homeward Journey – The Life and Works of Pope Benedict XVI, the fruit of my research is now available in local books shops, religious book shops and from the publishers, Veritas directly.

This short work, just over seventy pages is a light, accessible work that touches on the life, personality, main works, papacy and retirement of the late Pope.  It takes a brief look at his family background, influences, the milieu of World War II and his compulsory conscription into the Hitler Youth Movement.  His career as teacher, professor, scholar and writer was perhaps the time when Joseph Ratzinger was most at home in himself, exceling in these areas.  It moves on to his time as Archbishop of Munich from 1977 to being created Cardinal and onwards to being Prefect of the Congregation for the Doctrine and the Faith (CDF) where he was catapulted to international prominence.

Towards the end of his years in the CDF, being in his mid and late 70’s, Ratzinger made some attempts to retire and return to his native Bavaria.  He hoped to resume a solitary, peaceful life of reading, study, writing, reflection and prayer.  However, being so closely aligned to Pope John Paul II and he depending on him so heavily, he was reluctant to let him go.  Being Dean of the College of Cardinals at the time of the funeral of Pope John Paul,  Ratzinger was very much to the fore, being celebrant of the funeral liturgy and despite his senior years, there was perhaps little surprise when he was elected Pope on April 19th, 2005, assuming the name Benedict XVI.

The book looks at his time as Pope until his surprise resignation in February of 2013.  The Papacy of Benedict was not without controversy.  According to perception he turned the full circle from being liberal in his views to a more traditional approach.  In his role as guardian of the faith in the CDF and as Pope he was staunchly traditional and conservative in his outlook.  His dealing with some theologians, women, LGBT issues, safeguarding, inter-religious dialogue and liturgical matters led to areas of conflict with some on a number of occasions.  The book, in very limited space, attempts to evaluate and consider the legacy of this significant and important contemporary prelate.

One of his big themes, or hobby-horses if you like was what he termed ‘the dictatorship of relativism’ lamenting the fact that many did not acknowledge the existence of an objective truth, that in his view was proposed by Christianity.  From early-on he recognised and commented on what he saw emerging in Europe; that it was increasingly post-Christian, albeit the faith continued to grow and expand in some other areas of the world.

He varied in style and personality to John Paul and also to his successor, Francis. It has been said that one went to see both John Paul and Francis, but one went to hear and listen to Benedict.  His wisdom was to be digested, not so much in sound-bytes, but teased out in detail with accompanying depth of thought.  Raniero Cantalamessa, the preacher in the Papal Household summing up the three popes that he served described John Paul as the Cosmopolitan, Benedict being the Theologian and Francis being the Pastor.

Benedict, despite the aura of remoteness and austerity that surrounded him was a gentle, kind, shy, unassuming, welcoming person and all of that is accounted for in this publication.

Local artist in Ennis, Harry Guinnane painted the portrait of Benedict for the front cover of the book. Many of the photos and images of Benedict are very serious and rarely capture the joy, contentment and good humour that was characteristic of the man, according to those who knew him well.  However, Harry succeeds in capturing these aspects in his work.

Joseph Ratzinger, Pope Benedict was utterly immersed in the Christian message, the love of God.  He spent a long and fruitful life, sharing this.  His final words “Jesus, I love you…” are consistent with his life spent exploring the mystery of our faith and our redeemer and saviour, Jesus Christ who was everything to him.