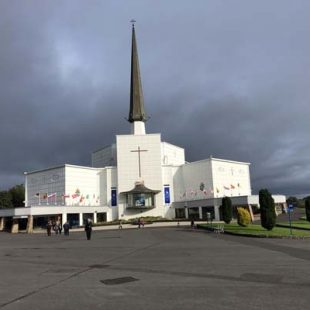 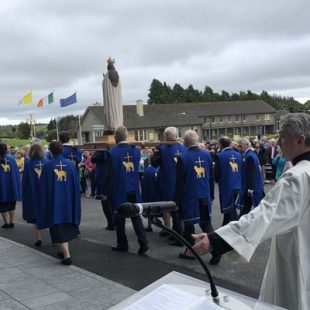 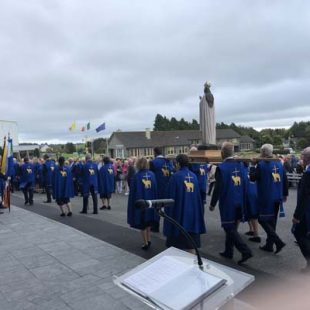 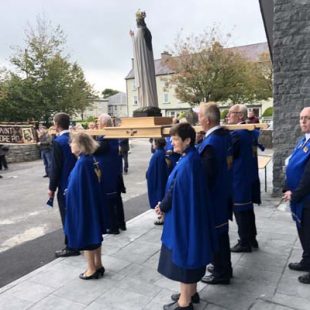 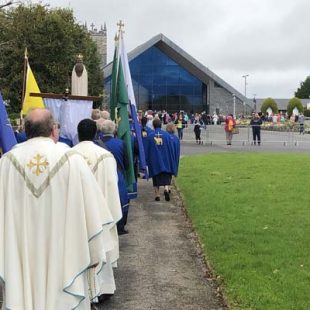 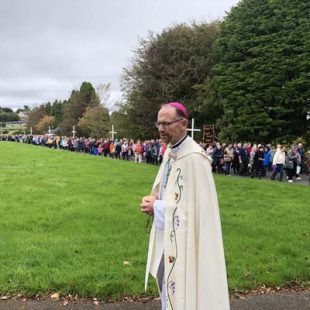 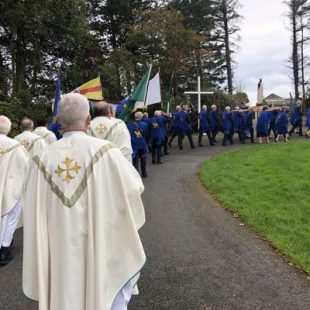 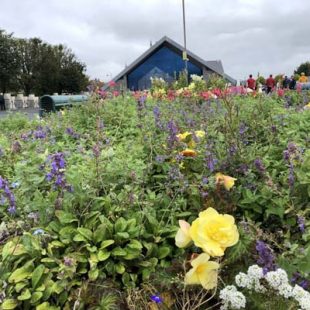 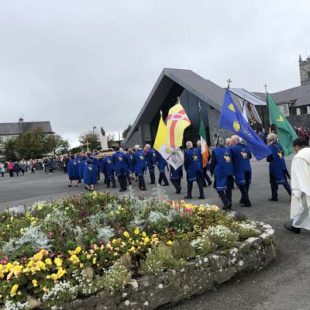 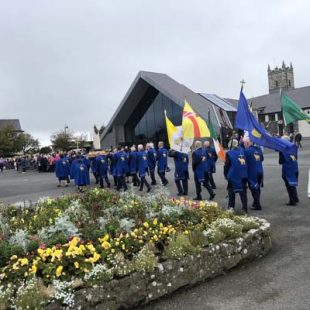 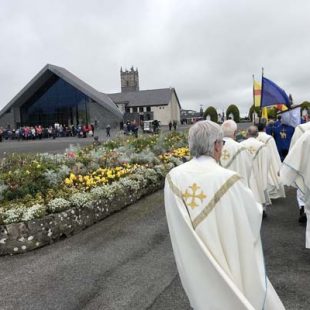 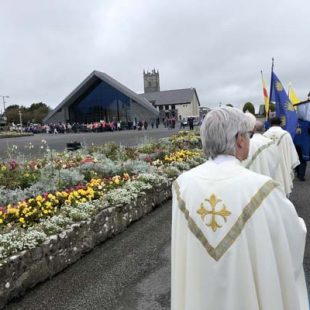 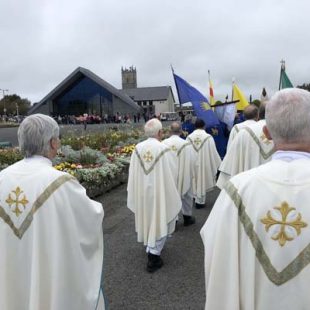 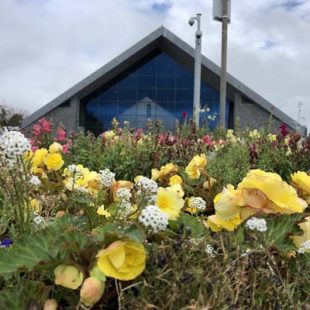 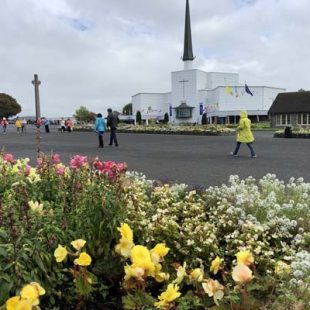 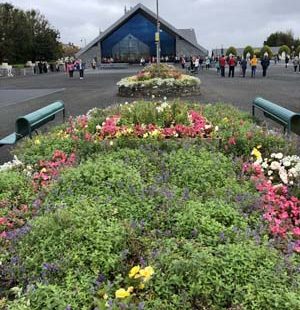 In the town of Tullamore where I was born and raised in going from our family home to the primary school I had to cross the Grand Canal that ran through the town.  The point of encounter with the canal was a bridge and a lock.  The lock was a huge black wooden structure with enormous horizontal beams that had to be levered open manually.  On the way to school on my bicycle as a young boy I occasionally stopped to watch the activities of the swans who often gathered there. Every now and then a boat would be going through the lock and it was fascinating to watch. To see the lock opening, the boat entering and being elevated from one level to another higher level along with the rising slope of the land was an interesting site.

The function of a lock as you know well is to bring the boats from one level to another.

The need for elevation

We all need things in this life to give us a little lift. We need things to elevate our spirits and take us out of the low lying areas of life and give that bit of elevation to rise to a higher plane, so to speak.

Reflection on the lives of the Saints – A lift

In spiritual terms along with the Sacraments, prayer, reading the scriptures, the Word of God – reflecting on the lives of the Saints can help us to receive that lifting of our spirits, our minds, hearts and souls heavenward.

Every age or era, with the kindly providence of the Lord, throws up saintly and outstanding examples of virtue and faith for our edification, St Teresa of Calcutta, St Oscar Romero, St John Paul II, to name but a few.

In a few weeks time on October 13th, in Rome Pope Francis will canonise a new saint, John Henry Newman a man who spent many years here in Ireland and we will get a chance over the coming weeks to reflect on and be inspired by his life and example of service, prayer, faith and spirituality.

Today of course and for many of you all weekend you have been focusing on the example and teaching of Padre Pio, St Pio of Pietrelcina whose anniversary or transitus we commemorate these anniversary days.  May the Lord increase his glory in heaven.

The Tragedy in not becoming a Saint

In the course of the Summer holidays last month I had a chance to read and reflect on an excellent book. It was called from From Fire by Water by Sohrab Ahmari, a renowned Iranian journalist now based in London.  It’s the story of his journey from atheism to faith and conversion to Catholicism.  In the foreword Archbishop Charles Chaput of Philadelphia quotes Léon Bloy, the great French Catholic convert whose famous and wise remark is “the only real sadness, the only real failure, the only great tragedy in life, is not to become a saint”.

In many ways that is so true.  As pilgrim people we are called to aspire to sainthood, no matter how short we might fall in that regard.  In the meantime what better place to start than reflection on the lives of many, the Saints who have been successful in that area.

The Draw to St. Pio

A multitude of things draw us to St Pio.

In reflecting on St Pio I’m not going to rehearse or chronicle the details of his famous life, mainly because I’m sure many of you here are much more expert in that area than I, after a lifetime of devotion.  For many people what might attract them to this remarkable modern saint of San Giovanni de Rotondo might be his holiness, otherworldliness, prayerfulness, his suffering, the stigmata, the gloves or mittens of healing or blessing, the misunderstandings, the persecutions, his dedication to the confessional and Eucharist, his awareness of the sense of sin, the awareness of the reality of the supernatural, devotion to Our Lady, his gift of bilocation, healings and cures, the aroma of violets associated with his presence and many other things.  We are also aware that since his canonisation in 2002 he is the Patron saint of adolescents, civil defence volunteers, Pietrelcina and stress relief.  What is significant and important is that the Lord gave charismatic gifts and St Pio placed them at everyone’s disposal, especially the suffering and the sick.

Four Aspects of the life of the great Saint

For the remaining time I’ll just reflect briefly on four aspects of the great saint that I find particularly significant, inspiring and helpful, namely

Right from the get-go as a small boy and very much a constant throughout his Franciscan life St Pio was outstanding and steadfast in his routine and practice of prayer, even and most especially in times of trial and tribulation.  When he began his time as a Capuchin he made it clear that his priority was simply to be ‘a friar who prays’.  From an early stage it was clear because of his efforts in this area that he was on the high road to mysticism.  He longed for the fusion of his heart with the heart of his creator.  Through his prayer, especially in the amazing way he lived and prayed the Mass, life on Earth was in perpetual union with God.

One of the great legacies of the Saint is the proliferation of prayer groups all over the world.  This great movement which was born in Padre Pio’s heart, has grown to be a tremendous chorus which links heaven to earth, and people to God; it harmonises angel voices with human voices, Heavenly music with earthly music; it brings peace to so many peoples heart in the love of God, and Gods loving hand to the hearts of so many people.

Padre Pio and the Madonna

One of the outstanding features of the Saints prayer life was his Filial love for Our Blessed Lady and we appreciate that so much as we pray today at this holy shrine.

One of the biographies I read beautifully commented that “the image of the Madonna appears like a filigree, during his most difficult moments”.  This was certainly the case through the eight decades of his life.  Padre Pio’s love for the Madonna became an endless, ardent, faithful prayer.  He was the Friar of the rosary.  The rosary was his favourite prayer.  He called the rosary his weapon.  He was reputed to say several dozen rosaries daily.  He also had a deep deep devotion to Our Lady of Pompeii.

As we know so well suffering was his hallmark.  He dedicated his life to prayer and suffering.   Like Abraham our father in faith and so many of the great saints he struggled with God and endured so many challenges, not least of them being the stigmata that he endured for a half a century.

His body became immersed in a flame of love, his soul filled with gentleness.

He was a living symbol of the cross for more than 50 years in the way he embraced the mystery of suffering and it is little wonder one of his main pastoral outreaches was the setting up of the famous Home for the Relief of Suffering in San Giovanni.

Certain aspects of the priestly life of the great saint stand out and are a great source of edification.  St Pio the Capuchin Friar embraced the brotherhood of his priestly fraternity wholeheartedly.

In so many ways he was the Good Shepherd of Jesus Christ, especially in his living of the Sacraments of the Eucharist and Reconciliation.

His Confessional was a clinic for souls.

He reminded people of the reality and power of evil and sin and lifted many out of the grips of such on their lives.

For Padre Pio, the Confessional and the altar were his whole life.

Padre Pio’s entire life was contained between two most brilliant lights: the altar and the Confessional.

The Sacrifice of Calvary, the Sacrament of Divine Mercy and heavenly pardon, are the visible components of Padre Pio’s fruitful priestly Mission.

Pastoral Joys and sense of humour

Even though at times Padre Pio was portrayed as being harsh, tough, cross, uncompromising, not suffering fools gladly he was also a person of deep joy at being immersed into the things of pastoral life and also had a good sense of humour.  His spontaneity was enjoyed and appreciated by many.  In his words “Christianity is joy and happiness and there is no need for faces to be darkened by frustration”.

Above his cell door, number five in the friary in San Giovanni we read the famous lines ‘The glory of the world is always accompanied by sadness’ – a maxim taken from The Imitation of Christ.  St Pio throughout his life transformed that into the other maxim ; “Servite Domino in Laetitia  – Serve the Lord with joy”.

As an example of his sense of humour when commenting on the challenge of getting religious to listen to and practice the word of God he famously said:

I won’t say whether I agree or not!

In the world of sound byte that we live, we often search for little mottoes, short little aphorisms to sum up a person or a situation. The simple and effective and deeply wise phrase of St Pio that most captures his spirit is :

Along with that for him the two most important rules for living were:

Love of ones neighbour,

His famous words Pray, Hope and Do not Worry have inspired many, as have his prayers, teachings and great faith.

Reflecting on the remarkable life of this extraordinary servant of God is not just something to marvel at and admire, but in our own way might confirm us more deeply onto a saintly path that we try to navigate.  In the words of the saint himself “After I die I will do so much more…. (and) …”My real mission will begin after my death”.  His heavenly spirit leads the way!

Reflection on the saintly life of the holy St Pio of Pietrelcina can and does transport us and give us a lift … like that lock in Tullamore… elevate us to a higher reality so that we might be able to journey up stream to engage with whatever challenges life might bring for us in that future time on what we hope will be our journey to heaven.