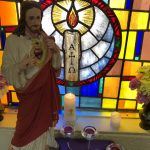 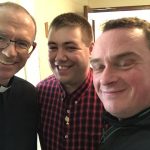 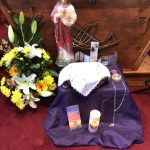 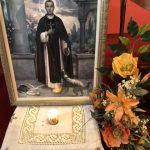 It’s a great delight to join with you this morning for the final day of the Triduum to St. Martin.

What a lovely form of devotion it is to have three short days of prayer.

A richness of celebration this time of the Year

We all need heroes to look up to and admire, people who give us inspiration and direction and encouragement in every walk of life and this is true especially in our faith. Last night the All Stars in the GAA world were celebrated and feted and it was great to see two of the Clare Heroes hitting the mark.  Two days ago we celebrated the All Stars of our faith with All Saints.

Today we remember one of those great All Stars, Martin de Porres.

St. Martin de Porres was born in Lima, Peru, on December 9, 1579 to Don Juan de Porres, a Spanish nobleman and adventurer, and Ana Velasquez, a freed daughter of slaves from Panama. His father abandoned the family when Martin and his sister, Juana, were very young. Ana supported her children by taking in laundry. Martin’s childhood poverty did not embitter him but made him sensitive to the plight of the poor, and especially the orphans to whom he would devote much of his time and resources. Even as a child, Martin would give the family’s scarce resources to the beggars whom he saw as less fortunate than himself.

The seeds of Vocation

At the age of twelve, Martin began an apprenticeship with a barber/surgeon. He proved extremely skilful at this trade and soon customers, who at first were sceptical of the young coloured boy, came to prefer and ask for him.

Becoming a Man of Prayer

After leaving home, Martin lived in digs and entered into a serious life of prayer. Always a devoted Catholic who spent much time in church, Martin begged his landlady for some candle stubs. She was curious about his activities and one night spied on him through a keyhole and witnessed Martin in a vigil of ecstatic prayer — a practice he would continue throughout his life.

Martin joined the Dominican Order of Preachers as a lay-brother. As a Dominican he continued to practice his old trades of barbering and healing and performed many, many miraculous cures. He also took on kitchen work, laundry, and cleaning.

His relationship with his brothers was tinged by their curiosity and occasional pranks. For example, just before the meal was to be served, they would hide the potholders and Martin would have to lift the scalding pots with his bare hands. Yet never once did his fingers get burned, legend tells us!

Martin often challenged his brothers on their racial attitudes. In a week in which we have seen so much of that with the murder of the Jewish worshipers in the US, attitudes against travellers here in Ireland – the question of respect of difference and the underdog is highlighted in a timely way for us by Martin de Porres.

Story of Fairness and outreach of St. Martin

In one story, Martin came upon a group of Indians sweeping the floor under the watchful eye of one of the Dominican brothers. When told that they were cleaning to repay a meal they had received, Martin pointed out that the brother had fed some white people the previous day without forcing them to clean. After Martin’s firm but gentle challenge, the brother took up the broom himself.

Martin frequently insisted on performing such hard and menial tasks as caring for the Order’s horses in the evenings, even when informed that servants were available for these chores. He would argue that the servants were tired from their day’s work while he, Martin, had done very little. He also extended his healing gifts — going to the servants’ quarters and treating their ailments.

Martin’s spiritual practices were legendary. He would often fast for extensive periods of time on bread and water. He loved all-night vigils, frequently praying by lying down as if crucified, sometimes kneeling but, miraculously, a foot or more off the floor.

In a week in which we hear so many warning about respect for animals in the season of fireworks, bangers and crackers with Halloween week – we look to the example of St. Martin.  On Wednesday night a frightened and terrorised little dog followed me all the way down town – distraught having been separated from his home due to the trauma of seasonal noises.  It’s always such a pity to see innocent animals suffer, especially when they can’t communicate for themselves.

St. Martin’s love of animals was legendary. He would feed and heal all animals that came into his vicinity and they understood and obeyed him. St. Martin is often portrayed in religious imagery with mice and cats because, according to one story, the monastery was tired of their rodent problems and decided to set traps. Martin was so distressed that he spoke to the mice and cut a deal with them that if they would leave the monastery, he would feed them at the back door of the kitchen. From that day forward, no mouse was seen in the monastery.

In a time when in Ireland we are scourged with the plague of homelessness and poverty – again St. Martin has much to say to us today. It was St. Martin’s charity that made him the patron saint of social justice. Martin fed, sheltered and doctored hundreds of families. He also provided the requisite dowry of 4,000 pesos to enable at least 27 poor young women to marry. Last, but not least, he established the Orphanage and School of the Holy Cross, which took in boys and girls of all classes and taught them trades or homemaking skills. Over much criticism, he insisted that the school staff be well-paid so that they would give their best service.

St. Martin died on November 3rd, 1639. He died surrounded by his brothers and reciting the Credo, his life ending with the words “et homo factus est” (He had became Man). His funeral was attended by thousands of Peruvians from all walks of life who vied to get a piece of St. Martin’s habit as a relic. These pieces of the saint’s habit have been associated with innumerable miraculous cures.  St Martin de Porres is buried in the Convento Santo Domingo in Lima, Peru.

The Legacy of St. Martin

So today as we conclude the these three days of Prayer and Devotion to St. Matin we recall, remember and endeavour to imitate his 5 great characteristics:

All great Christlike characteristics and traits at the heart of the beatitudes the Gospel of All Saints, the All-Star day of our Faith.

We thank God for this “hall of famer”, St. Martin to inspire and encourage us on our pilgrim journey.