Wash & Pray – A New Daily Habit That Might Lift All Spirits 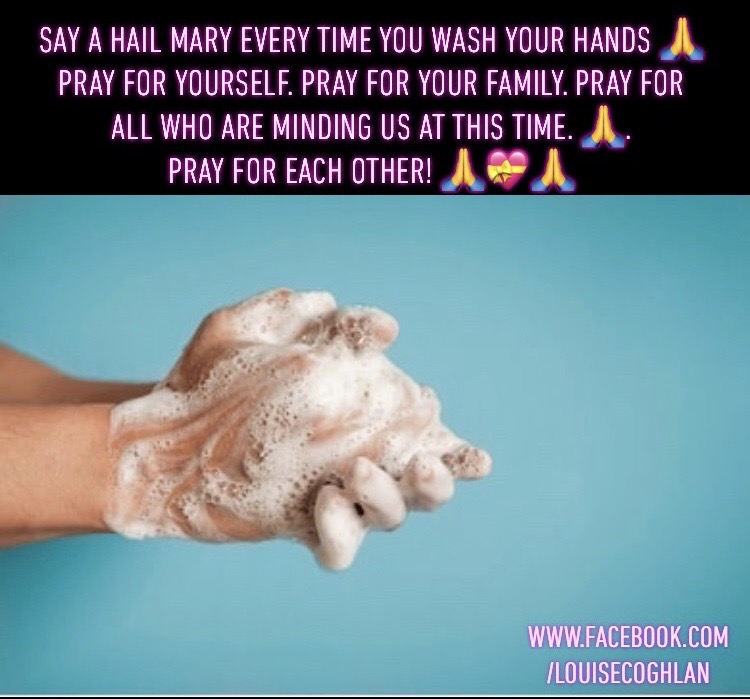 Kildare native Louise Coghlan was standing at her one hundred and six year old granny’s sink when a thought struck her. She was in the middle of intensely washing her hands as it’s now become the most important action we make with the threat of Covid 19 at all our doors. This idea came to her as she scrubbed her hands and was trying to make sure she was spending enough time doing it. The idea was that maybe instead of singing happy birthday while we wash our hands, that we say a prayer instead. In Louise’s own words, “I was thinking maybe we could be doing something extra special while we are washing our hands. If we said a Hail Mary or two at the sink, we would be both helping ourselves by the act of washing our hands, but we would also be helping someone else by offering our prayers for someone who might need one right at this moment.”

Also Louise mentioned that it would be an ideal opportunity to include children in this practice and it might instil less fear in them about Covid 19 but a symbol of hope, faith and love while washing their little hands. As Louise states, “ Lots of children know their prayers better than most of us adults really so it would be no problem for them to say it. Also a lot of children were looking forward to receiving their First Holy Communion and making their confirmation, so it would be a nice tie in with what was meant to be a very special time of year for them. Also children are amazing. Once you lead them with something like this practice, they will not only take it on but they will embrace it in a way only a beautiful young child can.”

Louise Coghlan is the granddaughter of the well-known 106 year old Nancy Stewart of the village of Clonard in county Meath. Nancy is approaching Covid 19 with the same calming mentality as her granddaughter. In a recent Facebook video with over 400,000 views on it, Nancy stated “not to get stressed and worried about this virus. Just do the right thing. Stay calm and stay at home, wash your hands well and trust in God that everything will be alright. I am saying lots of prayers for everyone and once we keep our faith that everything will be alright, I’m sure it will be.”

Louise’s idea of saying a Hail Mary or two when you wash your hands is an ideal opportunity to bring a little bit of faith back into the home and also back into your own life. She believes that it might help calm our nervous systems as well by getting into the habit of saying a little prayer while washing our hands and that no matter what, it can’t be a bad habit to start in such a worrying time. Also Louise mentioned that “by saying a prayer while you are washing your hands, it’s a win win. You are washing your hands to keep yourself safe and by saying a prayer you are doing good for someone else. There are lots of people who are very stressed, isolated and worried at the minute and to say a prayer for them is a really nice thing to do. Your first washing of your hands in the morning could be for the doctors of the country. The second time you wash your hands could be for nurses. The third time could be for people who have Covig 19 or who are worried that they have it. The fourth prayer could be for people who are lonely and isolated in their houses and so on for the whole day ahead. Children love a story behind an action. And children are amazing for creating love and kindness in this manner, the washing of your hands along with the prayer could be the structure to let their hearts bloom. A bit like show and tell with the added bonus of instilling a little faith, hope, love and kindness as well. Also for the little children, it adds a different dimension to washing their hands and it would be good for their brain and their emotions. Prayer is a meditative approach to repeating words that have such a lovely meaning behind them. And also it allows the child to attach something doubly positive to the habit of washing their hands. They are protecting themselves but they are also sending good energy and thoughts for someone else.”

Louise’s idea has gained great traction from social media and people are really beginning to include it in their daily lives. Since we are in such a worrying time with lots of very unknown aspects to the Corona Virus, a little prayer could definitely do no harm. When a nation is fearful and when a virus such as this can cause such destruction, worry and heartbreak, the idea of introducing a little prayer into your home might be just what the spiritual doctor ordered.