Westbourne – A House with History – Clare Champion Article No. 19

I am privileged to live in a house called Westbourne which has been the residence of the Catholic bishops of Killaloe since 1919. Prior to that date bishops lived in a house (no longer standing) in Ashline adjacent to the Kilrush road and the motorway. The name Westbourne is generally attributed to a house on the western perimeters of a town. It was built in 1856 by Rodger Bannantyne whose family had flour milling interests in Ennis and Limerick. It later passed into the ownership of a Captain Parkinson and the last of the Parkinson family who lived there were two unmarried sisters or the Misses Parkinson as they were known.

Bishop Michael Fogarty purchased the house from the elderly sisters in 1919 a fact commemorated by a small plaque outside the front door which reads “+ M.F 1920 A.D.” Bishop Fogarty lived there until his death in 1955. 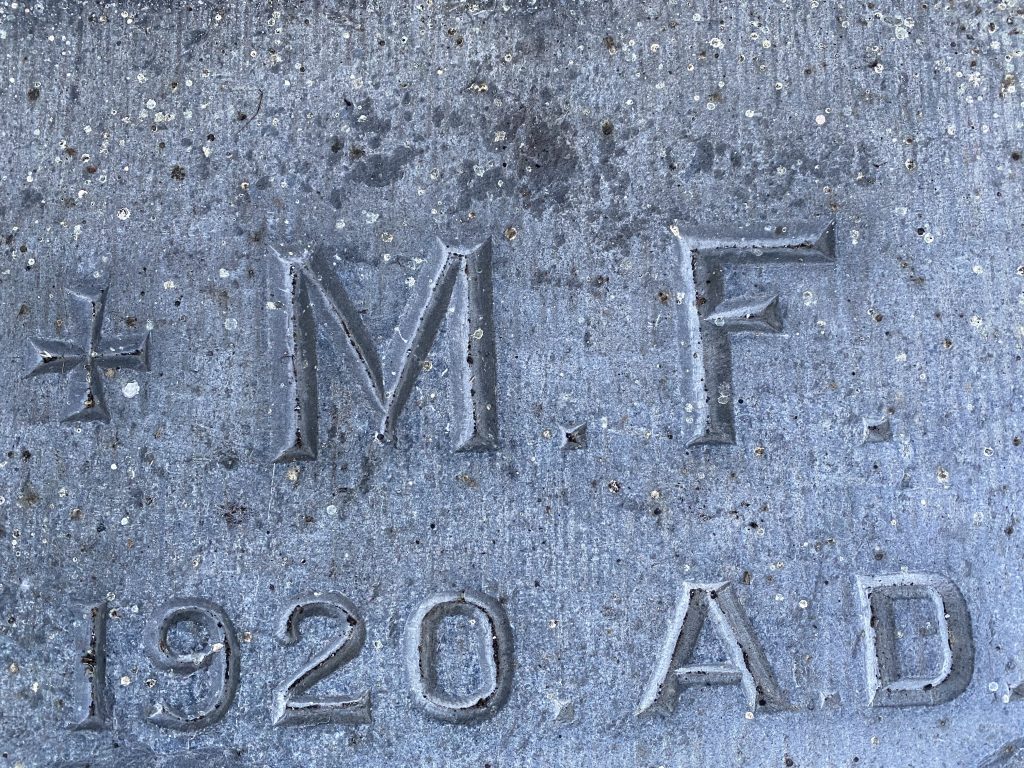 Bishop Joseph Rodgers succeeded him and moved into the house in 1955. Sadly, Bishop Rodgers did not live long in the house as he died on 10 July 1966. He had taken a walk in the garden in the evening and suffered a heart attack and his body was found on the next morning. Bishop Michael Harty took up residence there in 1967 and lived there until his sudden death at his sister’s home in Dublin in 1994. Bishop Willie Walsh lived there from 1995 until his retirement in 2010 and happily Bishop Willie is still hale and hearty in his retirement. Bishop Kieran O’Reilly moved into Westbourne in 2010 and moved out on becoming Archbishop of Cashel in 2014.

The grand old house known as Westbourne welcomed me four years ago. I am very conscious of its history and the duty and responsibility that caring for a house of historic significance places on the diocese of Killaloe. Such houses are something of a relic left over from another age and would not be first choice today for a bishop’s residence at a time when we are all downsizing for various reasons. The reality is that places like Westbourne present more a duty of care today than representing any of the vestiges of a status symbol that they represented, and which seemed to matter more in the past. However, it is a duty the diocese is happy to fulfil.

Bishop Michael Fogarty spent so long in Westbourne and at a particularly historic time in the founding of the Irish State that Westbourne is imbued with a sense of his interaction with that period. His long tenure in Westbourne lends the house its most interesting and colourful stories.

Bishop Fogarty, one of the longest serving bishops in the country (1904-1955) immersed himself in the social and political challenges of the day. Regularly he spoke out against landlordism, supported tenant ownership and agricultural self-sufficiency. Even though he disapproved of the 1916 rising, he signed the 1917 manifesto against the partition of Ireland and spoke of the ‘hideous atrocities’ that the triumph of British culture perpetrated on Irish nationalists. The following year he shared a platform with Éamon de Valera during the Clare by-election campaign, and in 1918 was critical of the threat of conscription in Ireland, insisting the Irish were ‘not slaves’. He developed a close friendship with W. T. Cosgrove who visited Westbourne regularly.

His Lenten pastoral of 1921 maintained the republican position, insisting that Irish nationalists had only to remain steadfast to win a united Ireland. Because of his republican approach, he surprised many by supporting the Anglo–Irish treaty. The Lenten pastoral of 1922 insisted that, regarding partition, ‘time will cure that difficulty too’. He went on after that to criticise anti-treaty propaganda that emerged at the time.

He left a handwritten account of an attempt by the Black and Tans to kill him, 100 years ago. This story has been published and is well known but always worth the retelling. On the evening of Thursday 2nd of December 1920, he received a telegram from Lourdes from Archbishop Mannix of Melbourne asking him to meet a visiting Archbishop for important business in the Gresham Hotel in Dublin on the following Saturday. Fogarty reluctantly agreed to do so and set off the following day, deciding to stay in Limerick that Friday night. It turned out to be a turn of good fortune that he was out of the house then. In his absence, at four in the morning of Saturday 4th of December four Auxiliaries of the Black and Tans raided Westbourne.

They were received by housekeeper Miss Murray and the houseman Frank O’Connor came upon the scene. The purpose of the raid was Bishop Fogarty writes, “to take my life, carry me off, and, according to General Brozier, bury my body in the Shannon.” General Brozier was head of the Auxiliaries and his account is in his book “Impressions and Recollections”.

Two of the raiders, one “a very tall and savage looking man” and the other “rather short and thick with face heavily blacked” repaired to the cellar and began to “drink raw whiskey out of the barrel – one of them having his head under the tap when Frank descended upon them”. They returned to the library where the other two were located. They promptly left, ordering Miss Murray to come no further. Their names according to Fogarty were never discovered “even by Mick Collins”. It is said that the tall savage looking man was an officer in the war, of Italian parents who was shot by the I.R.B. during the truce in Cork. The “short silent one” was said to be named Igoe, an Irish Catholic from Wexford. The other two in command “were supposed to be the same that afterwards murdered O’Callaghan and Mr. Clancy, mayor of Limerick. One of them called the other, in the presence of Miss Murray by his name which she said seemed like ‘Webb’”.

One of the invaders was believed to be a “local non-Catholic”, a man who some nights later “raided the college on the Play Night before Christmas” with a revolver. Following that, in April 1921 “my house was set on fire by the Black and Tans”. Sometime after that, local priest Fr. Hamilton saw the same suspect in the street and was followed by him in the town towards the square. It appears that the same individual on that occasion was followed by two Sinn Feiners “who suspected that the Black and Tan was animated by destructive intentions as to Fr. Hamilton.” Fr. Hamilton had a narrow escape as the Sinn Feiners foiled an attempt to shoot him.

Bishop Fogarty concludes “From all of this it is possible that this low sized individual was a local Black and Tan who was kept chiefly on night duty in Ennis, who was quite fully informed about the town, and able to act as a guide to the Auxiliaries when they came for me.”

A century later, I am happy and somewhat relieved to report Westbourne is a much quieter place, yet the hallowed halls still echo the interesting tales of the founding days of the Irish free state and the prominent prelate who was its first episcopal occupant. 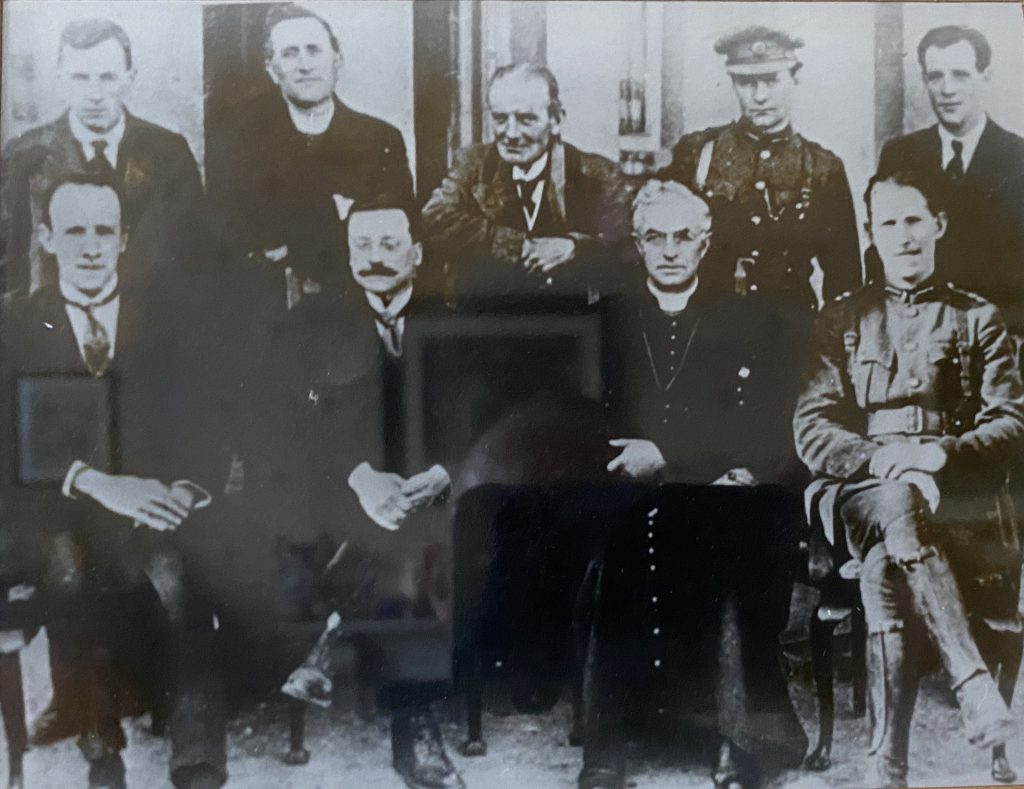