Address for Launch of Go make Disciples of all Nations – The story of the Men and Women of Ennis Parish who took up the Gospel Challenge Compiled by John Bradley and Cora McNulty in Association with the Clare Roots Society – Maria Assumpta Hall, Ennis, Thursday, 6th of December, 2018 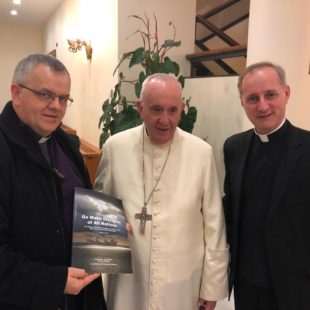 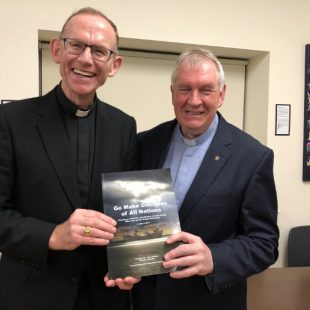 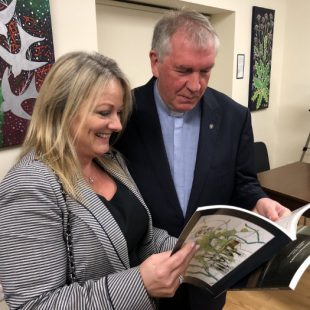 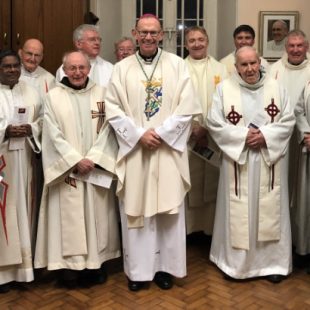 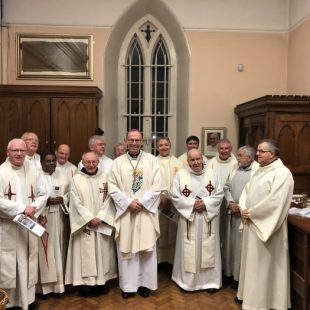 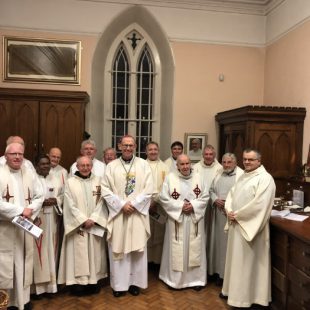 On Thursday 6th December 2018 at 8.00pm Bishop Fintan Monahan will launch a book entitled “Go make Disciples of all Nations” in the Ennis Parish Centre. The book, which has been compiled by John Bradley and Cora McNulty in association with The Clare Roots Society, recalls the countless men and women from the parish who gave their lives in service of the Gospel as priests and religious throughout the 20th Century and into the 21st.

This project, which was the brainchild of Fr. Tom Hogan in his last year as Parish Priest of Ennis, honours the vocations of men and women from the parish who witnessed to the values of the Gospel at home and throughout the world. Fr. Tom was keen to salute their memory and record their names and achievements – ‘lest we forget.’

The Clare Roots Society came on board early in the project and there is much valuable genealogical information included about Ennis families. Great credit is due to Cora McNulty and John Bradley who took responsibility for the compilation of this beautiful production. The project was greatly supported by the community who shared information, memories  and photos as well as the archivists of the many religious congregations to whom the men and women of Ennis dedicated their lives.

Filled with memories, photos and reflections, this book promises to be a wonderful record of faith-filled people whose lives are worthy of recall. The launch will be preceded by Mass in honour of these Men and Women celebrated by Bishop Fintan Monahan in the Cathedral of Ss. Peter and Paul, Ennis at 7.30pm

Books cost €20 each and will be on sale at the launch and thereafter  at Ennis Parish Office, O’Connors Newsagency, The Market,  Mary Kelly’s Newsagents, O’Connell St. and Ennis Book Shop, Abbey St.

There is a very tense, dramatic, explosive and revelatory scene in Brian Friel’s Philadelphia here I come in which the main character Gar is contemplating leaving rural Ireland in difficult economic times to leave the lonely, sad, meaningless routine existence he was experiencing at home.  He was desperately looking for reasons to stay.  In his home – the local Canon is visiting his Dad for their daily cosy, comfortable chat, cup of tea and game of drafts.  Gar looks to the personality and life of the Canon for inspiration, for meaning and for direction, but he gets little satisfaction…

The scene reaches a crescendo with the words:

“Gar and Canon Byrne.  Gar lashes out at Canon Byrne.  You could translate all this loneliness, this groping, this dreadful bloody buffoonery into Christian terms that will make life bearable for us all.  And you don’t say a word.  Why arid Canon?  Isn’t this your job?  To translate? Why don’t you speak then? Prudence, arid Canon? Prudence, be damned!  Christianity isn’t prudent.  It’s insane!”

Go make disciples of All Nations – a chronicle of the life of the priests and religious of Drumcliffe parish is an account of the insane translation that many heroic souls who absorbed their faith from the homes and sacred walls and earth of Drumcliffe parish over the past 118 years.

Last Saturday there was a launch of another wonderful book called Slí na Manach, a pictorial account of the lives of the Cistercian Monks in Mount St. Joseph’s in Roscrea.  The author was a man called Fr. Laurence Walsh, a cousin of Bishop Willie Walsh. At the launch Bishop Willie commented on the impact 72 years ago of when Laurence announced he was going to be a monk. Such a decision, in terms of the world even way back then amounted almost to insanity.  Insanity it seemed to be.

The task of Translation!

The job of the priest or religious, having taken that insane step is to translate.  To enter into the foreign world of the spiritual life.  To inhabit that world.  To absorb the strange ways of this other world.  To become at one with it.  Then to return to the world we live in and translate that in terms that will give hope and life and faith to those around her or him.  This is the radiacal, adventuorous and woderful call of the priest or religious.

The duty of a Priest or Religious

John Henry Newman reminds us in Plain and Parochail Sermons that the duty of a priest is to remind people that “life is short, death is certain, eternity long”.  You can just imagine how much of a challenge it is to unpack this consice gem of wisdom that has far reaching implications into people’s lives!

The former abbot of Glenstal Mark Patrick Hederman has for the title of one of his books Manikon Eros – describing God’s love for us as mad crazy, almost lunatic love.  Love of the Prodigal Son calibre.

One of the best vocations posters I ever saw was a Jesuit one with St. Ignatius of Loyola on the poster and the spanish pharse Esta un Loco pour Iesus Christo – there is a madman for Jesus Christ…

In the words of Tom Hogan in his introduction to the list of those we might consider insane, loco, mad with the love of Christ: “These women and men were ‘Peregrinatio  pro Christo’ – ‘Pilgrims for Christ’.  They made their home in far away places and connected with the hearts  of their parishioners and students. They built churches and created parishes, ministered to the sick and dying.  They educated and formed generations of young people, inculcated Christian values and idealism. Above all they were generous and faithful. We salute their memory and record their names and achievements ‘lest we forget’.”

John Bradley reminds us in his opening lines “These missionaries have made an invaluable contribution to their adopted lands and they left enduring and valuable legacies”. This beautiful work is a record and chronicle of much of that.

They say that God loves stories and the reason He created us was that when we die he will love hearing our stories.

Go make disciples of All nations recounts the details of a no fewwe than 173 stories, people who spent their lives in the adventure of being Perigrinatio Pro Christo!  Archbishops, Abbots, Papal Nuncios, Sisters, Brothers, Priests, Mother Superiors, Monsignors, Monks, Missionaries, Seminary formators.  Writers, singers, musicians, composers, sports people, teachers, nurses, builders, builders most of all of a spiritual legacy of faith, hope and love.  Some stayed on the mission and died in their boots, so to speak, other moved on to other calls, other vocations in life.  We remember and salute them all on this occasion and thank God for their witness and love.

I love the logo and cover image of the book, the people in the boat.  It’s an Irish Missionary boat memorial created by Shane Gilmore erected in September of this year outside the Killaloe Diocesan Apostolic Workers building on Station Road, here in Ennis.  It’s is beautifully woven into the image of the sea, the dark clouds of challenge and potential danger, but the shimmer of the light of hope at the very centre. Great thought and creative spirit therein!

The illustrated map by Hilary Gilmore on the back cover gives an idea why this book was possible with the extent of the religious tradition here in the town of Ennis.

The image of St. Francis and the ancient Friary from late 13th century!

The Cathedral from 1843, constructed at a most difficult time in Irish history with so many struggling to survive and make ends meet.

The back page reminds us of the clear indication that the town was literally steeped in the ancient tradition of Christian faith, going back centuries…  It is no wonder that so many brave missionaries, religious and priests grew up from the fertile soil of such a tradition.

The big question in any organisation is where to from here?  Cá bhfuil ár dtriall?  Quo vadimus?

There is one item among many in the book worth mentioning and reflecting on in Tom Ryan’s article, Tom who crosses the divide between diocesan and Franciscan here in the town, a man entitled to wear the Franciscan habit, yet very much the parish priest as well.  In this reflection he notes that he is now the only Irish resident in Cathedral House.  One is from Croatia, another from Poland, another from India?  A sign of things to come?  A reward of the rich legacy perhaps of what was brought across the globe by the 129 individuals mentioned in this book being launched tonight.

As you have seen by now this is a handsome, well produced volume.  There are good pictures, beautifully produced, with an excellent lay out.  It is full of intruguing and interesting narrative, interspersed with wise sayings, poems, quotations, articles, reflections from many of the people chronicled, themselves and much, much more.  There is a good index, it is well referenced and overall so well produced.  Value not only from the religious and faith perspective, but also from the historical point of view…

Coming as it does in the first week of Advent – It would be an ideal stocking filler, a great present for anyone who might have an interest in Church and or history.

To crown it all – even Pope Francis was impressed with it on Monday morning last when Tom Ryan, Brendan Quinlivan and Seamus Horgan presented him with a copy!

Congrats to everyone involved, especially Tom Hogan, John Bradley, Cora McNulty, the Clare Roots Society and everyone else involved in the production and design.

To use the lovely phrase – Saothar slachtamhar atá sa leabhar seo!  Is mór an spórt é!  Congrats and well done to all for a superb production.

It is my happy duty to declare this beautfiul, worthwhile and valuable book well and truly launched.

Two interesting Poems in the volume – Not part of the talk!

Sagart a Rún (Our Dear Priest)

You walked with us a smiling mile or two;

You lit the coldest corners of our hearts;

You took the oldest truths that love imparts,

And made them new.

We thank you for your love, so richly worn,

That led us, laughing, through life’s vale of tears;

May God reward you for those shining years

Live with the men, go where they go;

make up your mind that you will share all their risks,

and more,  if you can do any good.

You can take it that the best place for a padre

(provided that he does not interfere with military operations)

is where there is most danger of death.

Don’t be bamboozled into believing that your proper place is behind the line; it isn’t.

If you stay behind you might as well come down:

you won’t do a ha’p’orth of good. Your place is in front.

The line is the key to the whole business; work in the very front, and they will listen to you when they come out to rest,

but if you only preach and teach behind you are wasting

time: the men won’t pay the slightest attention to you.

The men will forgive you anything but lack of courage and devotion—without that you are useless.