October – an Extraordinary Month of Mission

The theme for World Mission Sunday this year 2019 is: – “Together We Are Mission” 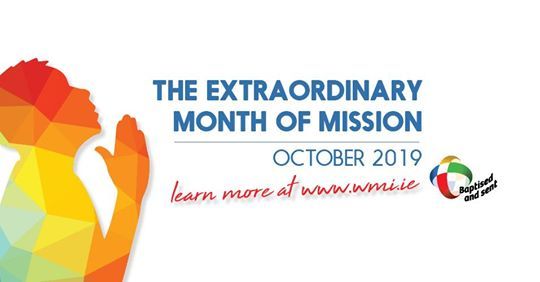 We have tended to think that it is only those who go overseas on mission work really have a mission. Pope Francis wants us to think of ourselves as missionary. We can easily see that we influence the lives of one another not only by how we live but what we say and do. The reaching out to one another with the message of the gospel, with faith, hope and love is at the core of who we are as Christians. Perhaps this was never more important than now as the number of priests and religious ministering in Ireland decreases.  Our Church is above all a global community. We depend on one another, our shared prayer is very powerful, our solidarity with the poor where ever they are is very powerful and our generosity to those who do work on the missions overseas is potentially transformative of the lives of people on the margins.

Once again we say a sincere thank you to for your extraordinary generosity to the missions over the years. Undoubtedly, this generosity is influenced by the many links that we still have with missionaries overseas. The Mission Sunday collection is made available to be distributed to over 1,000 missionary communities, that is communities unable to survive without outside help. In 2018 countries that benefited from your support included Cameroon, Benin, Togo and the Ivory Coast. Around the world, 40 per cent of the catholic church needs outside support. The diocese of Killaloe contributed €48,835.88 in 2018 on Mission Sunday and the Irish dioceses combined contributed €1,712,682.35

Nowadays there are many lay missionaries from Ireland as well as from all over the world. Countries where Irish priests and religious have ministered are now sharing their priests and religious with us in Ireland including in our diocese. In the past few years, returned missionaries and others have been meeting a number of times a year frequently at Bishop Fintan’s house exploring how we can keep the charism and gifts that those who have served on the missions alive in our diocese. These meetings will continue.

Pope Francis has declared this year’s October an Extraordinary Month of Mission. He wishes to recall the courage of Pope Benedict XV who in 1919 when the world was devastated from World War 1 published a special letter to the leaders of the church to revitalize the missions. The formation of two Irish Missionary Societies, The Columban Fathers and St Patrick’s Father’s were part of that extraordinary response from Ireland, not to mention the response of diocesan clergy such as our own diocese who volunteered as missionaries in the past thirty years in Zimbabwe, Peru and Equador. Pope Francis is once again reminding us that we all are called to be missionary, “every baptized man and woman is a mission.”

For more information, please contact: Fr Tom O’Halloran, Diocesan Director of the Society for the Propagation of the Faith, tel. no. 067-27105 tomashalloran@gmail.com

Society for the Propagation of the Faith (www.wmi.ie):